is a capital city of province in . There are three official languages in : Dutch, French and German. People who live in the Flemish region of , where is, speak Dutch, the first official language. is very ideal place to go to if you live in , because it is nearby and they speak the same language. You can feel as if you are at home.

I have been twice in Antwerpen for a day-out. I have not yet been to any other places in other than Antwerpen. So I was happy when we visited two weeks ago. It was my first vacation in and  both our first time in .

If you are looking for a middle ages city to visit, is the place to be. It has musea, port, university, monasteries, arts-treasures and castles. This is a place where you can enjoy history and trendy day-out and nightlife.

10 Things to Love about Ghent

is a picturesque city. The city medieval architecture, especially the old houses still remain intact and well-preserved. One of the contrasts I noticed between the Dutch and Belgian is, the Dutch give priority to neatness and Belgian to authenticness.

The Graslei is one of the most visited places in , the most favorite of everybody. I really admire this place. We sat for almost two hours watching the scenic view of the houses on the other side of the river . 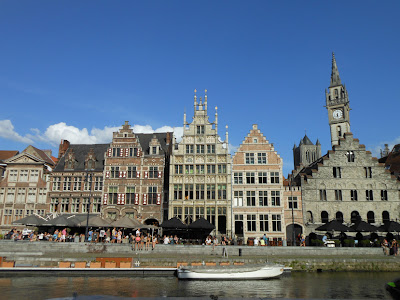 Eat and drink to your heart's content. Don't mind the price of food and drinks, it might be a bit pricey, but the quality you get is worth the price you pay.

We really love the Stoverij, a classic Flemish meat stew made with brown Trappist beer. (Trappist is a strong abbey beer) The Chateaubriand, a grilled beef steak also with Trappist is sumptuous. Most of the dishes are served with Flemish fries.

Of course, I did not skip the typical Ghent's recipe for dinner on our last day. Its name - the Ghent's Waterzooi. It sounds really funny if you literally translate it, Water + zooi (means mess). If you see the picture below, this one-dish-meal is indeed a mess, but it is really appetizing. I think Filipino would love this meal! (Wish there was a portion of rice on the menu!)

The Brooderie lunch cafe, the Godot and 't Voske restaurant are among the places you must try to dine in. They are all recommended by the travel reviews and now our suggestion, too!

The Duvel croquette on a Saturday market at Vrijdagsmarkt square is also delicious.

Don't miss a pint if you are in .  There are many cozy cafes and restaurants to choose from. From old taverns unique ambiance to modern stylish bars. Just choose what you prefer! Belgium is a beer country, so their beer sorts are numerous. (Beers in Belgium are cheaper than in Holland). I love most of all the dubbel, blond and lambic.

Het Waterhuis aan de Bierkant - it is hard to translate it in English. But if you understand Dutch, it is funny. 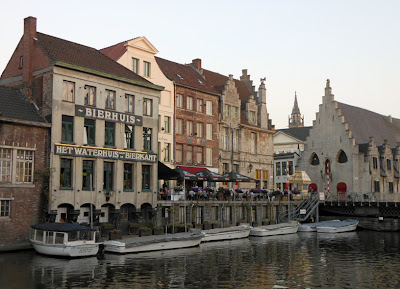 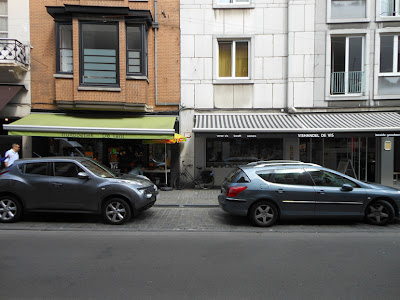 Goesting - a restaurant in . This word is a typical Belgian word. It means desire. But the meaning is also associated with lust for sex.

I have learned a new word. Brocant is a french word which means second-hand shop. I saw almost everywhere second-hand shops in . I really wanted to look inside, but we did not have so much time to do it. 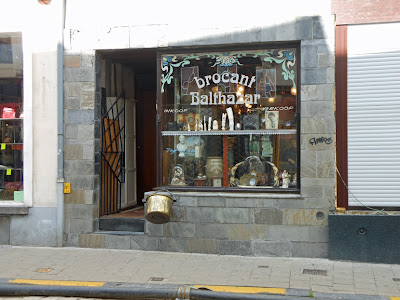 I really love to live in , because there are market fares everywhere. The Vrijdagsmarkt square are full of market stands every Saturday, some of the squares have flea market. 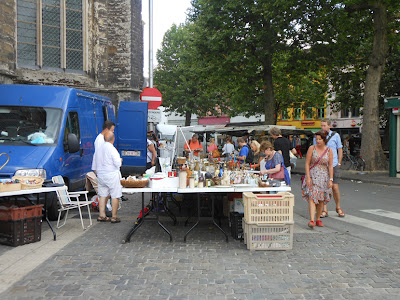 Sunday, the Vrijdagsmarkt is still occupied, because of the Vogelmarkt (Bird Market). It was my first time to see this special market day. You can buy ducks, chicken, rabbits, geese, fishes and other animals you can keep in your backyard. 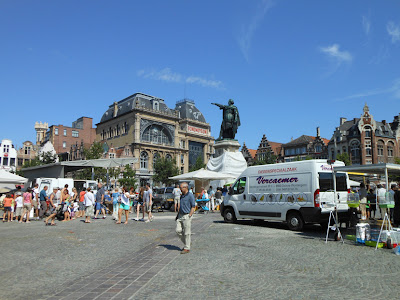 The public transport in is a lot, lot cheaper than in . They ride on time, less train delays and the conductors are very friendly. The announcements are more polite than in .

The HermeLijn, low-floor tram in is cute and it transport passengers perfectly. I like it so much. 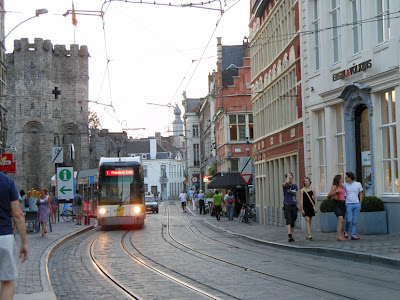 The Belgian are relaxer than Dutch. Both totally with different characters. I like the accent of the Belgian. It was hard for me to follow the conversation, because of their accent. I asked Honneponjie many times "Is she/he speaking French?", Honnepontjie replied, "Schat, they speak purely Dutch."

So far in our weekend vacation, we did not meet asocial people, only kind people. Chapeau!

The is one of the attractions in . It is a middle ages castle built on 11th century. The castle served as the seat of the Counts of Flanders, later became a courthouse,  then became a prison. The castle was renovated and some parts of the castle are restored to its original condition. Inside the castle is a museum with various torture devices which were used in . 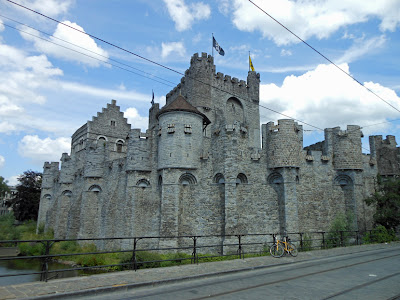 , River and the Cathedral 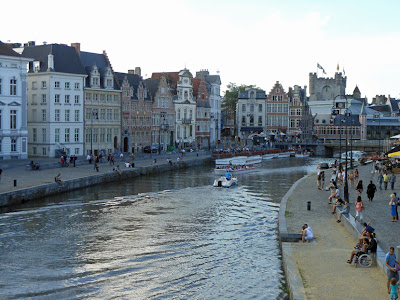 The river Lys cruise is one of the popular activities in . Our hotel is located along this river and we could see the river and the panoramic view of houses on the other side. Our hotel was formerly an old factory. The building is not really sound-proof, so in the morning we were woken by the sound of the cruise boat and the tourist guide with its microphone.

I think the first two things I will always remember on our Ghent trip are: our afternoon at the Graslei and the vegetarian tart we have eaten by the Brooderie. We truly enjoyed the weekend and I have only few words to describe Ghent. "An Exceptionally Beautiful City".

Thank you for touring us around Ghent! I would love to explore and experience the place too but viewing your photos will suffice :)

No thanks, Sis! I just wish you can travel here or come to live here. Next time I'll make a blog entry why. Thanks for dropping by. :-)