When I came first to Holland, I was stunned about how they regard sex as a part of a normal life. For example: there are late night sex advertisements on TV, classified ads on the newspaper, and paid channel for porn. There are red-light districts in the big cities like Amsterdam. It is here possible! Because prostitution is a legal job in Holland. A Kamasutra Fair is held once a year and there is a Dutch program shown every week called "Spuiten en Slikken", which is about sexuality and drugs. Public nudity is also ok, as long as you are in the right place and yes, they have sex museum in Amsterdam!

We visited yesterday the Sex Museum in Amsterdam. It is funny, because I have been living here in Holland for about six years and I have only been to Amsterdam three times (except Schiphol). That three times was when we watched twice classical concerts in the Royal Concertgebouw and when we visited the Rijk Museum two years ago.

The Sex Museum is a few meters away from the Amsterdam Central Station. This is the first museum to see along the way, if you take the Damrak street going to the famous Dam Square. The entrance is only 4 euro. 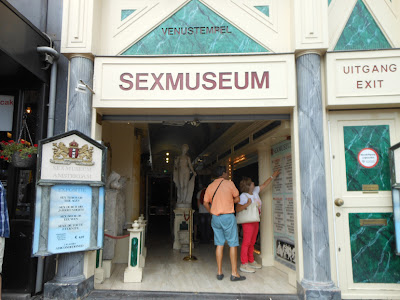 When I first saw this museum, I became curious and always wanted to visit it. And now I did it. I don't think that the exposition was vulgar, but of course it was bold. For me, it was a nice experience to visit it. The attractions are funny and some of the expositions are unusual. I am   amazed how people in the past dared to express their ideas about eroticism. It changes from generation to generation, though until now it is still one of the topics that is very uncomfortable to talk about. Our generation today is becoming more and more liberated, I am curious what would be the changes over 50 years. Would sex still be taboo?

This is new to me... Are you prohibited to take photos of the things found inside the place? If sex is legalized there, is rape or other related crimes non-existent? Just wondering, sis.

I guess i would be shocked too if i was in your shoe considering our Pinoy background.

I hope you are feeling better these days! ★

Hello Farida, it is not prohibited to use the camera inside.
Rape and other related crimes still happen, but the rate is lower.