When Honnepontjie arrived in the Philippines, he had only a day rest. It was not possible for him to get a complete rest, because of the the time adjustment, the weather and everybody wanted to see him. The day after, we woke up early for our early flight to Batanes. Tatay accompanied us to the airport. It was 2 o'clock in the morning and we slept only about two hours. Tatay and Nanay did not want us to go. They just wanted us to stay at home. My family wanted us to spend more time with them, we had only three weeks. Time flies.

But trip to Batanes is what I dreamed of. We had our tickets. We set already our minds. There was no turning back.

Perfect trip does not exist. Hassles are always a part of it. It is a learning experience. So I say always expect the unexpected.

I gathered informations about Batanes, what to do, how to get there, what maybe the possible problems that we may encounter within our trip. Thanks to the forums and blogs that I have read for those informations.

We booked our flight by SEAIR. I already emailed them before and called them as soon as I arrived in Manila about my reservation. There are only two airlines that are bringing passengers to Batanes. One is the Sky Pasada and the other one is of course the SEAIR airlines. Sky pasada is cheaper than SEAIR. But we chose SEAIR airlines, because their plane is newer than Sky Pasada.

I waited till I could get on sale tickets. But that time we were not lucky enough to avail one. So we paid about P34,000 for two retour tickets, direct flight from Manila to Basco.

We stayed at the Novita House, walking distance to Basco Airport. The house is quite big for two people. It has one big bedroom with aircon. They have also 2 extra beds in the living room and 2 toilets/bathrooms with boiler. The kitchen is equipped with all basic utensils you need for cooking. We paid P1500 per day, which I think is reasonable. The owner and caretaker are friendly and very helpful.

The house is about 100 meters walking distance to the market. There are also nearby eateries and stores where you can buy your necessities.

We were the last visitors that time before the renovation of the house. Although they said that the house has a cable television and a radio. We never had one, they said that the cable tower was destroyed by the typhoon. It is not really important, but we felt almost isolated. But I still recommend this house if you are travelling in a group. This house is a lot cheaper than the other hostels in town.

Here is their site: www.novitahouse.com

Ate Remy is a caretaker of the Novita House. She is also a tour guide. We told her that we would be needing a tour guide on our Sabtang Trip. We told her that we would just like to rent a mountain bike to our trip in Basco. We asked her if she knew someone, gladly she said yes! I can't remember anymore who is the mountainbike/motor owner. But I think it is a tourism project of Basco. You can rent bikes, motors and accessories. We chose to rent two mountain bikes and we paid each bike P30 per hour. We rented also 2 helmets for safety measures.

If you are planning to go to Sabtang, you must depart early. In the afternoon the waves get wilder. That is why there are only few Falowa boats sailing in the afternoon.

We departed from Novita House at 10 o'clock in the morning. But when we arrived at the Ivana Port, the boat was just left. We had to wait for the other one. There came a boat, but it was actually not for transferring passengers but for transferring cargoes. They started first loading cargoes so as; sacks of cements, other materials for building a house, sacks of rice, some other things and lastly us, the passengers. We boarded after two hours together with the few Ivatan. We sailed between the South China Sea and the Pacific Ocean heading to Sabtang Island. 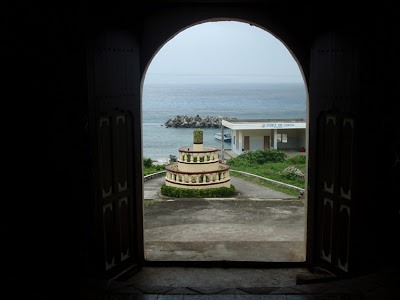 I was not afraid while we were sailing. In fact we had dried feet when we arrived in Sabtang. While sailing I was amazed with the captain. He is still young.  He was actually using his foot for turning the rudder of the boat, whenever there were big waves coming toward us. With all the prayers of the lady in front of us, we arrived safely to Sabtang Island.

It was already late. We could not make the whole tour anymore. Our tour guide asked us if we could split in two our tour. The same day, the tour at Barangay Sumnanga and the second one in the morning, - the Chavayan tour. We had no choice. So after registering, checking in for an overnight stay and eating our welcome meal, we headed to Barangay Sumnanga.

This island is so beautiful. The people, their way of living, what they eat. It gives you a perfect lifestyle. The cow's meat they have cooked for our lunch is "100% Fair Trade". It was tough meat, but it has a strong taste of beef. The meat and fresh vegetables come mainly from the island.


We slept over in the island. We stayed at Sabtang Tourism Office and we paid P300 per night. They informed us that the electric power in Sabtang Island turns off at 10 o'clock in the evening. But they have ready flashlight in the room in case needed.

We're not really satisfied about our faster-it's-already-dark trip in Barangay Sumnanga. We just dropped by to  Nakanmuan Arc to make few photos, it was already dark, making pictures was a failure.

When we arrived at Tourism Office, we rested for a moment, ate our dinner, then we walked outside. We planned to go to the port, but it was already high-tide. So there was no port to see. After our little walk, we went inside to rest. It was a very nice night. We slept peacefully.

Morning, we did not  have something to eat. We went outside and asked where we could be able to buy foods. We saw a store in Sinakan. We bought coffee and other chichirias (snacks), then I saw a very tempting bread. I was about to buy it. But the owner said, "You can also buy this warm by the bakery in Barangay Malakdang." It was so kind to say that. She could also keep her mouth closed and earn more, but instead she gave me an advice to buy it in the bakery, 100 meters farther from her. I said to her, "Dios Mamajes!"

It was a windy morning, we could see that the ocean was busy smashing his anger on the shores and of the cliffs. Our tour guide would like to go home on time, the same day to Basco. So we departed early in the morning to Chavayan.

I asked our tour guide if they are selling lots here. Because most of the stone houses are already gone. She said that as much as possible Ivatan don't like to sell it with other people in the mainland. As much as possible they would like to preserve the island, only for Ivatan. I said also that it is a pity that most family chose already to  build their houses in concrete rather than renovating their houses in traditional way, although I could not blame them. A modern house is better than an old house. Our tour guide told us that there is still no ordinance in Sabtang saying that you can't build concrete houses together with the stone houses.

I hope that there would be as soon as possible an ordinance protecting the stone houses in Batanes. So they could truly preserve their cultural heritage! 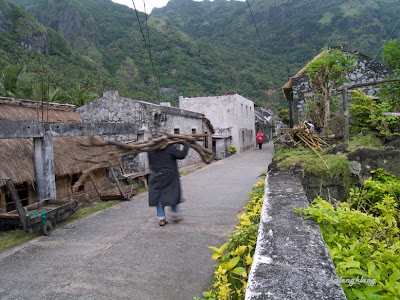 We arrived before 12 noon at the Tourism Office, we packed our things, paid all bills, then we headed to the port. It was raining. We would be sailing on the same boat with same captain. It was the only boat brave enough to challenge the ocean. I begun controlling my fear. I was about to surrender. I told our tour guide and Honnepontjie if we could just stay another night in the island and go home tomorrow for our safety. But our tour guide was decided. She said that all captains in Sabtang are all experienced, with diplomas and they know what they are doing. Honnepontjie told me that the captain and all other crew members will not risk they lives if it is not really safe. So I held on with those words.

This was the most exciting part!

From the port, they loaded up the Falowa boat with rusted thick metal scraps, old jeepney chassis, sacks of empty bottles, and other used materials. From Basco the used materials are being transferred in another ship going to Manila. After loading all of it, they gave us our life vests. I got a worn life vest with a missing chest strap. We were running out of time, we had to depart!

We were the only passengers in the boat, plus four crew members, the father of the young captain and the owner of the boat. All of them were not wearing life vests. We were sitting on a wooden plank after the captain. When the boat went out of the port, a big wave had welcome us and asked, "Are you really challenging me?".  The captain answered back by using his foot in maneuvering the position of the boat. We were sailing slowly, turning off and on the engine, because of the giant waves that were attacking us in the middle of the Pacific Ocean and South China Sea. I was calling all my Gods, reciting all the prayers I know, holding on tight. I saw before us a hungry giant wave that would like to eat us alive. Suddenly I got more nervous, because the wooden plank we were sitting on loosed. My Honnepontjie lost his grip and his feet was about to fell down in the engine. I held his one hand, so he could retain his grip. My heart kept pounding hard. I was asking myself, why it took us too long to reach the Ivana Port. I could not see any port, only giant waves.

After an hour or more, I could see the Ivana Church in the mist. God spared our lives. After we reached the port, we were all relieved and just laughed to each other because of this super duper memorable, unforgettable and exciting experience. I thought I was the only one who was praying. Our tour guide, too! I called this trip:  "Our Boat Ride of a Lifetime".

We were really happy and thankful that we arrived safely, We gave our high regard to the great Captain.

After reading your posts on Batanes, I can't wait for my piggy bank to be filled. Yes, I have a piggy bank for it ;-) I am so excited. I am expecting it to be filled by summer of next year :-)

Thanks for visiting my site. :-)

The experience we had in Batanes is more than the price we paid. The place is very beautiful and the Ivatan are very kind. Thumbs Up!

I hope your piggy gets fatter fast. :-D. I wish you a lot of success!

Have a nice day!

I hope I can visit Batanes before I turn 50 =) and I hope when that time comes the nature, culture and heritage of the island is preserved....need to save up...or look out for cheaper travel and tour package online. I so envy people who had to visit Batanes....I'll visit this place soon