A Wandering Pinay in Funchal

I was expecting again an orange tinted sky, when I opened the curtain. But there was not. But the rising sun and the view of the Desertas Islands amazed me. The name Ilhas Desertas or Desert Islands speaks for itself, the place is uninhabited, except for the scientists and rangers that monitor the islands. The islands are nature reserves for different species of animals, mainly birds and reptiles. One must have a license to visit the islands.

The second day of our awesome vacation is planned for the Funchal trip. I was excited. The evening before, we have reserved two seats for the free shuttle to Funchal provided by the hotel. It is not a bad idea to stay out of the vicinity of Funchal, because most of the hotels are providing free shuttles to the town. We are satisfied that we chose a hotel in Canico de Baixo, 9 kilometers away from a busy city of Funchal. The quiet and relax Canico de Baixo made us comfortable.

The bus chauffeur was waiting in front of the hotel entrance. We were lucky that we got the last pair  of seat. I sat next to the window. The bus departed on time and we rode uphill.It was the same zigzag road, where we have walked the first day.  We reached the coastal highway and we are pretty impressed with the highways and tunnels that they have built in the island. On the left, the view of the ocean and on the right, the steep hills with villages, banana plantations, different kinds of flowers, succulent plants and trees. Some of it are located on the top of the tunnels. It was amazing.

In the Netherlands a 9-kilometer distance is not far at all. It is a flat land. Madeira is its opposite. A 9- kilometer distance is not a piece of cake, because of its ridge landscape. The view along the way was overwhelming, especially when we were already near the city. We also saw the remains of the forest fire in the distance that hit the island last August. 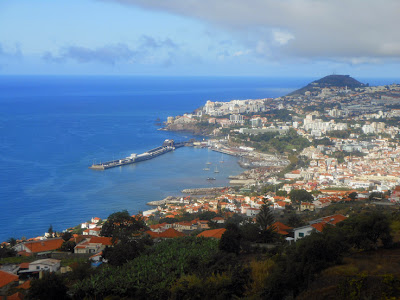 There are three places we highly prioritized to see - the Mercado Dos Lavradores, the Cathedral of our Lady of the Assumption and the Sta. Catalina Park. We decided to begin with the famous market and saved the park as our last destination. From the bus pick-up point, we walked to Funchal Marina. It is a seafront with many cafes and restaurants. 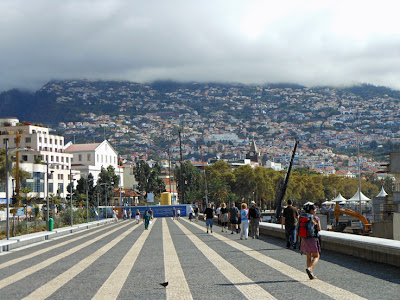 We had to search the way to the famous market. A small map we brought was handy . We saw the cathedral's bell tower along the way, so we have decided first to visit it. There were already many tourists in front of the cathedral. Two young men with a parrot and an owl and a musician who tried to earn money by their own means captured my attention. Thinking that the two beautiful birds were in captivity and they were being used to earn money, I pitied them. 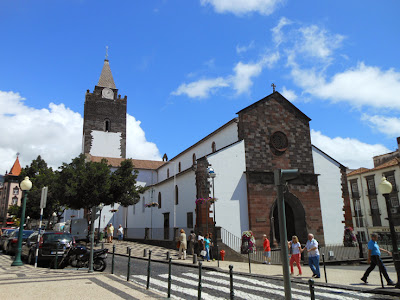 The Cathedral of our Lady of the Assumption has a Gothic and Mudejar architecture. Mudejar is a fusion of Islamic and Christian art tradition and it was new for me.

A certain part of the city Funchal is under renovation due to the landslide that happened not long ago. 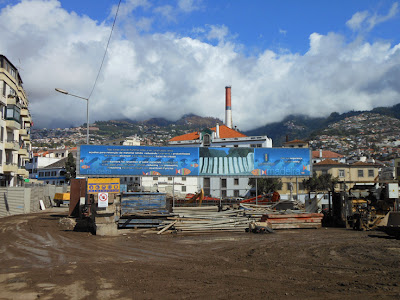 We have found the Mercado dos Lavradores. This is one of the most visited tourist attractions in Funchal. 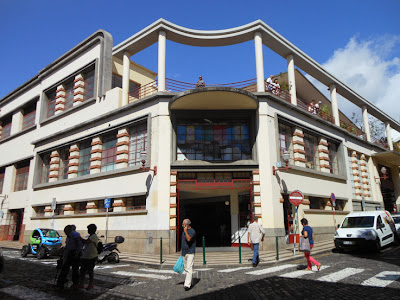 You can buy here fresh fishes and a wide variety of fruits and vegetables which come mainly in the island. Aside from what I have mentioned, there are also souvenir, handicraft and flower stalls inside the building. We have bought potatoes, vegetables and fruits. All in all in a paltry sum. 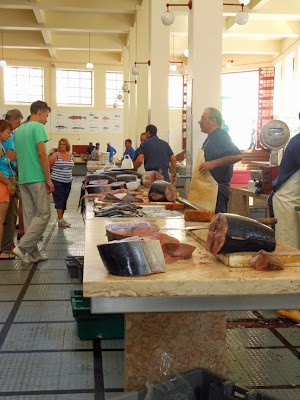 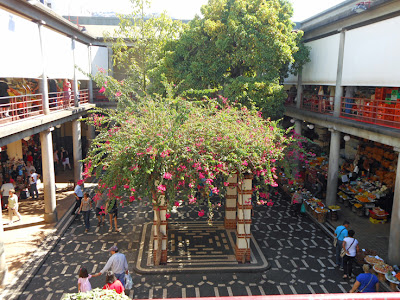 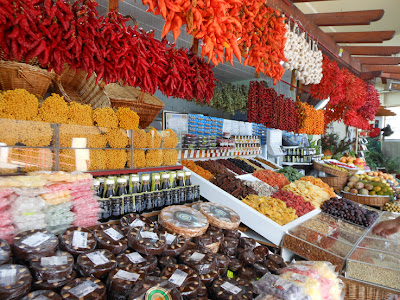 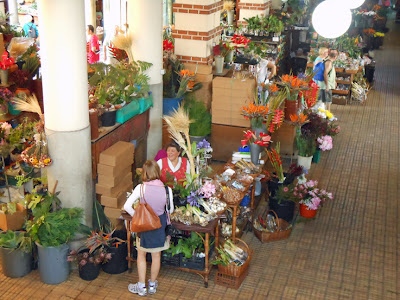 We walked along the Rua (Street) Dr. Fernao de Ornelas going back to the Funchal Cathedral. Along the way, we saw this canal. I made a picture of it, because it was very clean. The people of Madeira are environmental conscious. They know that they have to take good care of the islands and they have to preserve it for the next generation. 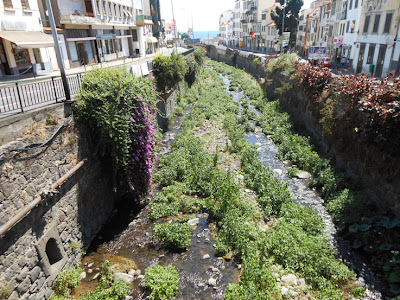 The cathedral is facing the Avenida Arriaga. The boardwalk along this avenue is very ideal place to enjoy the city. There are many restaurants, cafes and Italian ice cream parlors along way. You can chill out on one of the benches and watch the passersby. 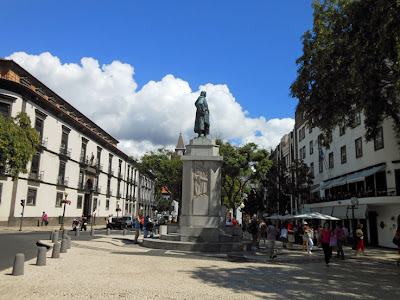 We saw the Jardim Municipal, it is a small park in the heart of the city. It has a variety of beautiful flowers and and trees native to Madeira. There is also a small podium for concerts and other activities in the middle of this park.

We arrived at Rua de Sao Francisco, a street adjacent to the Jardim Municipal. We saw an old jewelry shop. No one was inside except for the two old ladies we have assumed the owners of the shop. One of them spoke barely English. But she was not shy. We scarcely understand each other though, she tried hard to accommodate us. And because of their effort and sweetness, I bought a pair of old silver earrings and a pendant. They were so grateful that we came in and bought something in their shop. With their authentic smile, we have only felt sincerity and hospitality. This is one of the unforgettable moments we had in Funchal. 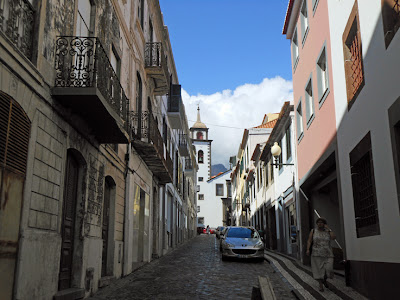 From Rua do Surdo we saw an old church at the end of the street. - the São Pedro Church. That is why we love walking, we always discover places which are not very touristic. The church is small, but the interior is very beautiful. The wall on the left side is covered with Delftware-like tiles, the right side has a Gothic art. 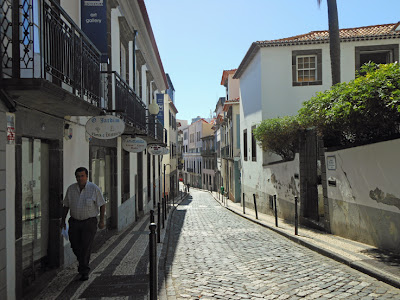 I have noticed the narrow streets. Just like in the Netherlands the old street roads of Funchal are also paved with bricks and the houses are attached next to each other. The Portuguese ambiance is something to enjoy on.

Our last destination was the Sta. Catarina Park. 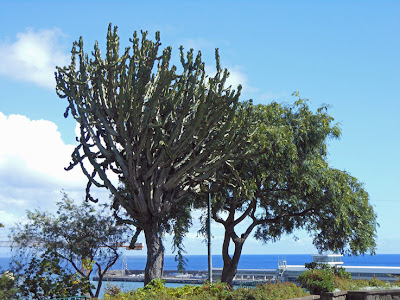 The lovely view of the bay of Funchal from the Sta. Catarina Park is worth a thousand words. There are many species of flora in the park. The succulent trees are amazing. Because we have walked the whole day, we spent the rest of the afternoon in the park. It is indeed a perfect place to end up the day. We sat on a bench along a man-made lake where the swans gracefully swam. 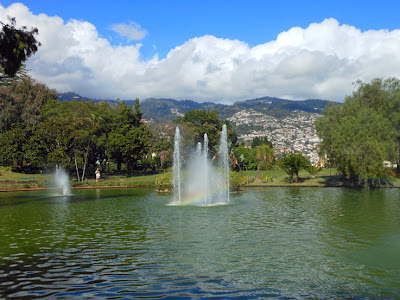 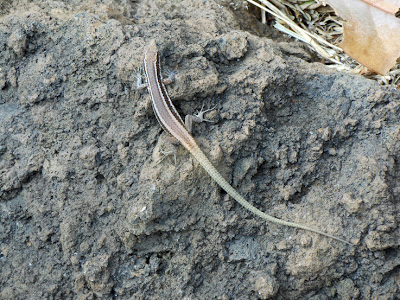 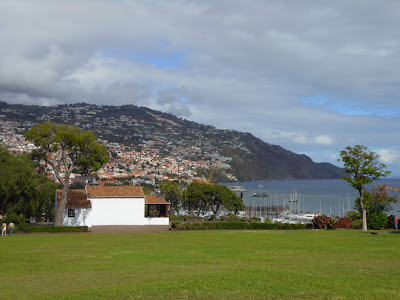 We headed back to the bus pick-up-point after doing some shopping at the nearby supermarket. While waiting for the bus, we still got the chance to see the pirate ship. The Santa Maria de Colombo is a replica of the 15th century Christopher Columbus' ship. This replica ship was built by a Dutchman living in Madeira named Robert Wijntje. 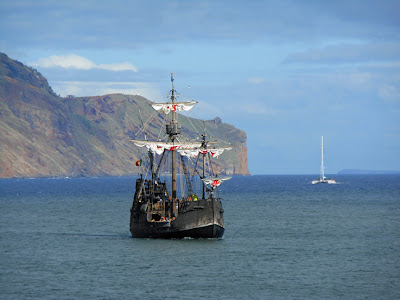 I often met fellow Pinoy during our other trips. But on this trip, I only saw few Asian people in the island, but not of them was Pinoy. It would have been nice if I have got to meet even one Pinoy kababayan. I was perhaps the only Pinay wandering in Funchal that time. But surprisingly, while we were watching the pirate ship, I saw in the distance the Philippine flag. I felt happy and I have just whispered to myself  "I am not the only one. Pinoy talaga is everywhere." 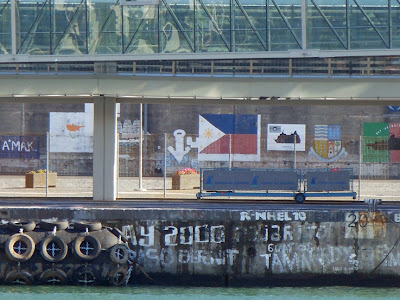 How are you? I enjoyed reading your very descriptive vacation as well as looking at the scenic photos you've included. I have a penchant for cobble street, I don't know why but I felt that there was so much effort put to finish such construction.

I hope you are doing well. Have you given birth by now? Take care! :)