Last year I promised that I will re-post an entry about our experience in Berlin. I love this trip, because Berlin is rich in history and culture. No wonder why I placed it as one of my most favorite city trips in Europe.

We took the ICE train early in the morning from Utrecht to Duisburg. Our travel time was about one and a half hours. From Duisberg Hauptbahnhof, we waited about an hour for our connecting train (also ICE) to Berlin. Travel time from Duisburg to Berlin was approximately four hours.

The ICE train belongs to German railway company, Deutsche Bahn. This train connects all the major cities in Germany. It travels at speeds of up to 200 mph, fast though, you will not feel its speed. (It was fun to  watch its changing speed on the digital board hanging inside the train). It has also connecting services to other parts of Europe like Switzerland, Austria, Belgium and of course the Netherlands.

The view along the railway was calm, colorful and mesmerizing, reasons why we always choose to travel in Autumn season. 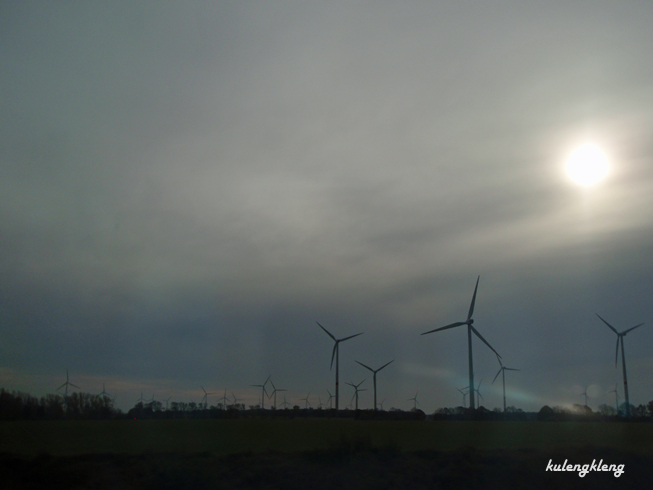 The modern Berlin Central Station is huge and clean. I noticed the garbage segregation system in Germany. They have different garbage bins in every stations and other public areas, more than what we have here in the Netherlands.

As soon as we arrived, we walked directly outside to get a glimpse of the city. 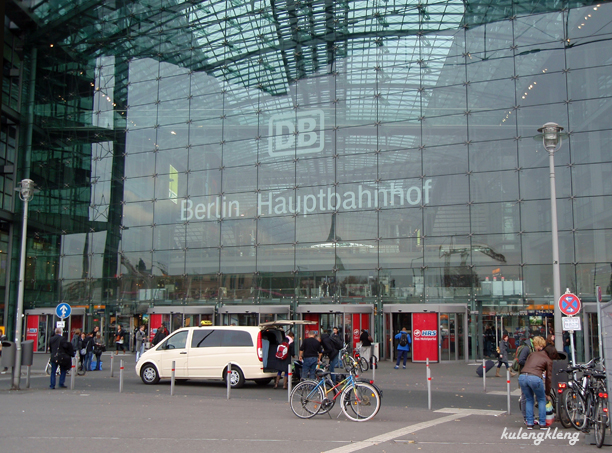 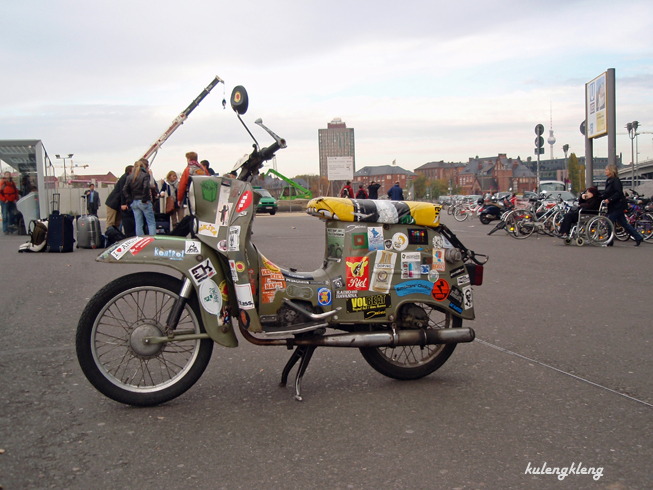 Off to the hotel. - Hotel Berlin Berlin.

We rode a subway train to our hotel. The hotel is located a few meters away from Nollendorfplatz Station and Park Tiergarten.

We went outside to see the city at night and also to eat dinner. Down the street we saw the Kaiser Willem Memorial Church.

This church was built in the late 18th century. It was fully damaged, because of the bombing during the World War II. But the German tried to restore it. They built an annex building to the ruined church. They have added a lobby, a chapel and a bell tower.

The shopping malls and other stores in Berlin are usually open from 10:00 - 18:00 hours. We were lucky that time that it was Halloween, they were open till 22:00 hours.

We were supposedly going to have dinner at the KaDeWe Mall, but because of their Halloween Sale, it was quite busy. There was a live band inside the mall to serenade the shoppers. The bars and restaurant inside the mall were full, we decided to change our plan and searched for another address outside.

We crossed the street and discovered something affordable, but dainty. Adjacent to this luxury mall was a small fast-food, where German and other tourists were munching sausages and fries. Out of curiosity if it was palatable, we ordered two servings of fries with curry wurst.

Curry wurst is a typical German pork sausage, steamed and then fried, cut into slices, and seasoned with tomato ketchup and curry. (It was delicious and I wanted to eat it again the other day.)

We ended up the night in a shopping center with a live band playing German folk music. There were  cafe tables and a bar where you can order pints. We ordered two pints and enjoyed the jolly German music.

DAY 2. Wandering around Berlin I

The sun was shining and a bit freezy, when we went out the hotel. I took a deep breath and mesmerized the surroundings full of Autumn shades. The red bear behind the entrance of the hotel was cute. I hugged him, afterwards we went to our day journey, we crossed the small area of the Park Tiergarten.

The life-sized bear is called  Buddy Bear. The creator of Buddy bears are Klaus and Eva Herlitz. There are plenty of Buddy Bears on the streets, squares and private premises in Berlin. These bears are decorated and painted with different colorful designs.

The roads in Berlin are wide, most of the buildings are high and huge, some are modern and some are neo-classical.

Our feet took us to our first station, the Victory Column. This monument commemorates the victory of the Prussian over the Denmark, Austria and France centuries ago.


We walked the circle going to the other side of the Park Tiergarten. A giant-sized Bismarck Monument was very eye-catching.

The giant monument below is dedicated to Otto von Bismarck, the first chancellor of the German Empire.

This monument is not only present in Germany, but also in many parts of the former German Empire. I read that this wonderful monument was relocated from Reichstag to Tiergarten.

After a while,  we walked via Park Tiergarten going to Bellevue Palace. We asked ourselves that time, why this lovely palace was fully guarded? Only now I have learned that this palace is the official residence of the President of the Germany since 1994.


From Bellevue Palace, we walked through the road along the Spree River to Reichstag.


Almost every buildings are huge and the roads are wide. I found it amazing. We saw the German Chancellery and the House of the Cultures of the World along the way.

We reached successfully the Reichstag. We appeared at the west area of the building. 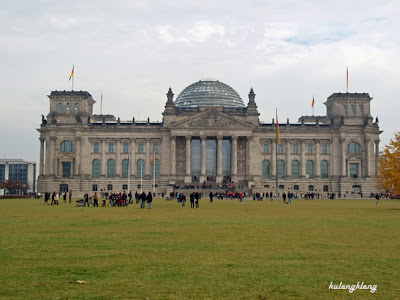 Reichstag is the name  the building. But during the German Empire, the Reichstag was known as the parliament of Germany. This building is open daily and one of the busiest spot in Berlin. Because of the long queue, we did not go inside. 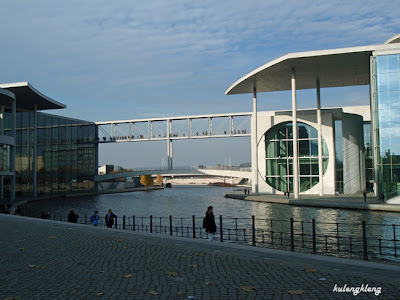 Instead we walked at the back of the Reichstag building and we saw this modern architecture (above). 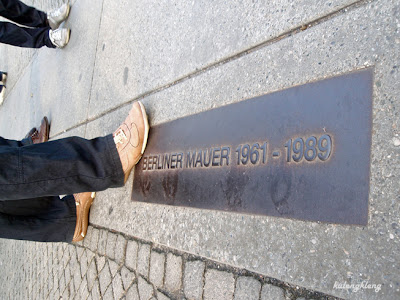 We saw also for the first time the trail of the Berlin wall through the inscription on the ground.

Due to the "brain drain"  idea in East Berlin, the wall was erected to avoid people to immigrate in the West Berlin.

Although we had a map, we tried to follow the inscriptions on the ground on our way to Brandenburg Gate.  It was hard to imagine the real wall that split Berlin in two, the wall that brought miseries to many people. 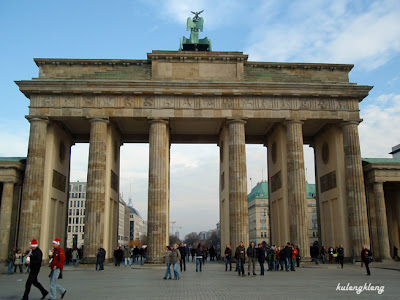 The Brandenburg Gate is a well-known landmarks in Germany. From the triumph of Napoleon to the terror of the separation of the east and west Berlin, this gate has witnessed many historical events. Now, it is a meeting place for artist and one of most visited destinations in the city. 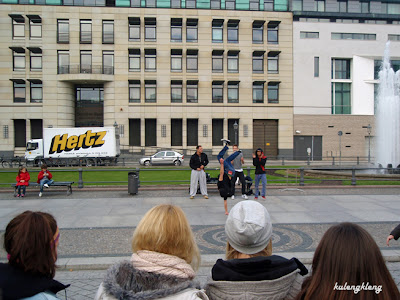 The Holocaust - Mahnmal is also not far from the Brandenburg Gate. 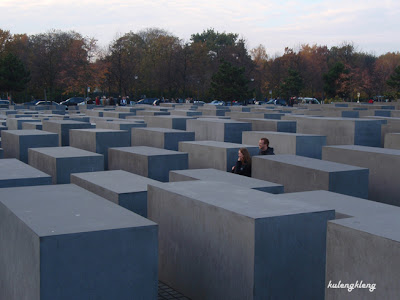 The Holocaust Monument is dedicated to the Jewish victims of the Holocaust.

After our visit to the Holocaust Monument, we took the subway train (S-Bahn) to Alexanderplatz. We would like to visit the Hacke's Market and the Television Tower.

The Hacke's Market is filled with bars and restaurants. We dined in one of the restaurant.

The Hacke's Market was at that time a disregarded area. But after Berlin is reunified, they have developed the place to a new commercial and cultural spot for tourists.

Because we were already tired, we postponed the plan of visiting the Television Tower. But in exchange to the first idea, we visited the hippest shopping center in Berlin. - The Hackersche Hofe! :-D 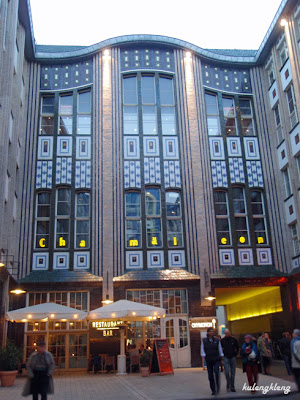 The Hackersche Hofe is adjacent to the Hacke's Market. It is a very unique shopping area with a 19th century ambiance. The passages are small and narrow, all connected to eight courtyards. The courtyards differ from each other. Some have bars and restaurants, boutiques, others are apartments, art galleries and other amusement venues. They say that the Hackersche Hofe is a place for business, home, and pleasure.

In the picture is the St. Mary's Church, one of the oldest church in Germany. This church was originally a Catholic Church, but during the religious revolution in Germany, this has been converted into a Lutheran Protestant Church.

From this park, we walked towards the Berlin Cathedral and there we found a very nice Vietnamese restaurant to dine in. Eet smakkelijk!

We went first to the Postdamerplatz for the Dali exposition.  We did spend a lot of time in this museum. But it was nice to see some of his first artworks. 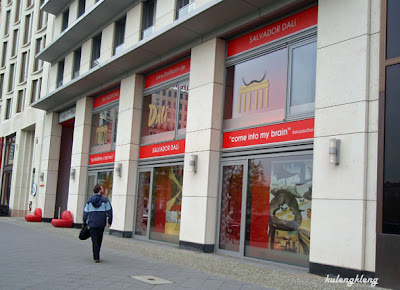 From Postdamerplatz, we followed again the inscription on the the ground going to the outside museum, - The Topography of Terror. 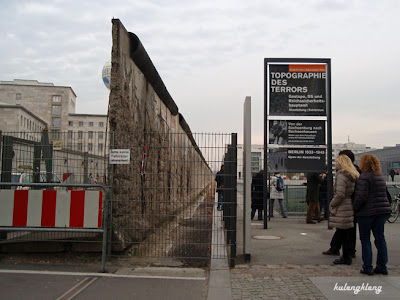 The site of the Topography of Terror was earlier the headquarters of the Gestapo,  the secret police of the Nazi and SS (Schutztaffel), a paramilitary organisation under Hitler. The little portion of the wall here is never demolished. I am glad it was not, otherwise I would not see it in real. 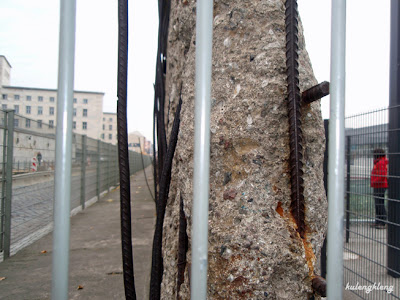 I got goosebumps when I was standing in the site. Though I am not a German, but learning that there were many people who suffered and died in this area during the Nazi Era. I felt sadness. 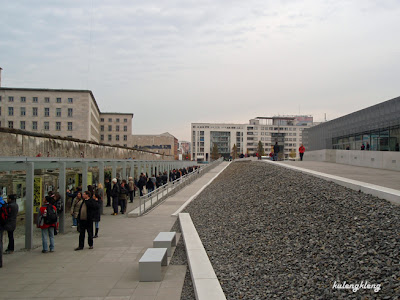 We walked down the street going to Checkpoint Charlie. They have placed along the way a long wall where you can read through about some sad stories of the people who tried to escape the wall. One story that I still have in mind, is the story of Chris Geuffroy, who is the last person to die in the attempt to cross the wall. He was shot dead. 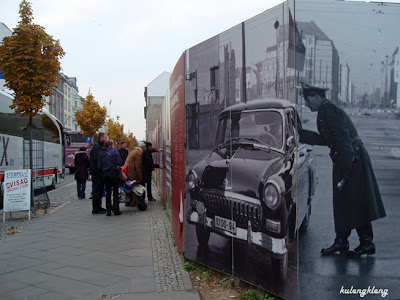 I am not a German and maybe some readers will laugh at me, but reading those true stories on the wall, I noticed myself crying before we have reached the end of the road. - The Checkpoint Charlie.

The Checkpoint Charlie is the most popular crossing point during the Cold War. Because it is located in the middle of the city. It was a checkpoint open for German and non-German. There were many checkpoints between the East and West that time, but most of them were only open for German. 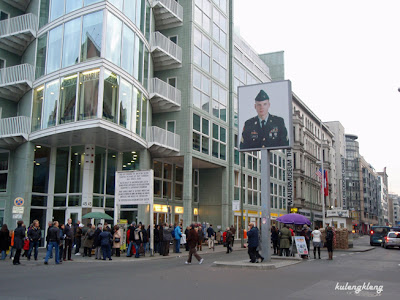 After our visit to Checkpoint Charlie, we took the subway train going to our last destination. - The Berlin Television Tower or Berliner Fernsehturm.

The plan of watching the sunset above the television tower was impossible. It was quite busy that day, everyone must wait an hour for their turn. No choices, we had to wait. 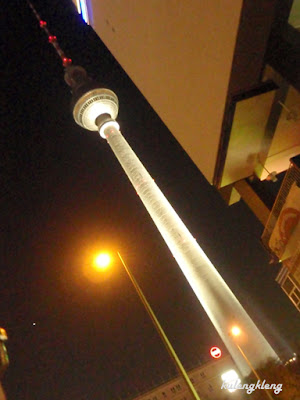 There is a restaurant on the next platform of the Television Tower. This platform slowly revolves 360 degrees. You need another ticket for this. If you only have a normal ticket (ticket to the observatory platform), you can also visit the restaurant, but the seat is subject to availability.

If you want to surprise your girlfriend/boyfriend, this place is the place-to-be!.

We checked out early, because we have decided to visit one more place before we leave Berlin. - The Charlottenburg Palace.

This palace is the largest palace in Berlin. This is very known for its garden and its baroque design. We did not go inside, because we did not have time anymore, but the front of the palace was enough to adore it. I bought some souvenirs and postcards at their shop. 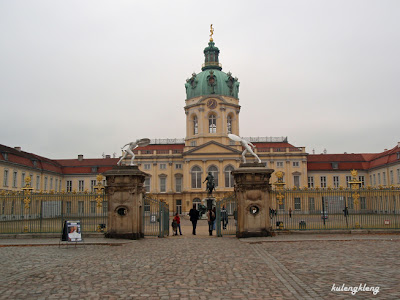 Looking back to what we have done for three days on this trip, I learned a lot. Berlin has touched my heart and we will come back here for sure!

Dearest Kulengkleng,
Oh, how wonderful to see the historical event of your country. We also have the Royal Family and we can share the feeling what you have now(*^_^*)

Thank you so much for your sweet comment, I DO hope your dream to come to Japan can come true someday.

Sending you lots of love and hugs from Japan, xoxo Miyako*