I asked Honnepontjie to have a little walk with me last Wednesday. We always walk to the park, whenever we have time, but last Wednesday I requested him if we could go to the second hand shop nearby our house. We needed another bookshelves and maybe we are lucky to find a steady new-like bookshelves for our work room. Unfortunately, we did not find any bookshelves that we like, instead I found two dolls that I am collecting.

I visited a braderie five years ago.  Braderie is a street market held annually in summer months here in the Netherlands. Local vendors, other traders, craftsmen, and some individuals put up stands on the street to sell goods at a reduced price. The individuals that I am saying, sell used goods like clothes, toys, shoes, antiques, and other stuffs which are still new or still usable. These stands are customarily accompanied with various food stands, live music, people in traditional clothes and nice attractions for kids. Braderie is really fun, because you can buy things cheap and sometimes you can also find rare items for a friendly price.

Talking about rare items, I came along that time to a stand with empty buyers. People just passed by. Maybe because old dolls were less interesting than used branded clothes. But the dolls captured quickly my attention. First I was hesitant about asking the price, maybe it was expensive. But then I said why not? So I asked. Each of them cost 50 euro cents. I bought one first, but then when I came home, I realized I had to go back to buy more dolls, because it was really, really cheap. I hurried back to the braderie and bought six other dolls. The man smiled at me and said, "Please, take care of the dolls." He even gave me an extra doll chair for free. I think the dolls belonged to his mother. No one would have it in the family, I think, that is why he sold it very cheap.

These are the dolls that I bought five years ago.


My friend and I visited the second hand shop last summer and I found one more doll (the doll with blue eyes below) and before Sinterklaas, I was walking with my parents-in-law along the Oude Gracht, when I saw again another doll with a very lovely smile (the doll on the right side, below). 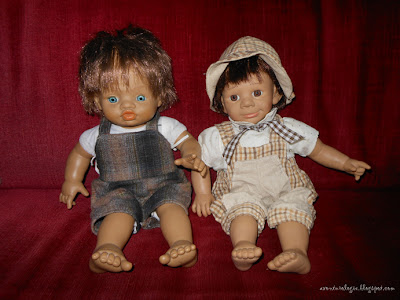 And again, last Wednesday with Honnepontjie, two other dolls appeared to my eyes. Surprisingly, those two dolls belong to the other dolls that I bought five years ago.  :-)

I still do not know what for doll series I have. I have searched already in the internet about these dolls. Because I am really curious who created them, how old are they, and where do they came from? But I am still not lucky enough to find any information.

Every time I see their facial expressions, it makes me laugh. Some are really funny and some are really adorable. I am not a fanatic collector. But if I see again another one, different from those dolls I have now and it is cheap, I still have space in the house.

These dolls have their distinct facial expressions! And you have a handful of them too :D