Visiting Munich (and a little bit of Austria)

It was autumn of 2008 when we visited Munich. We have a friend living in Andechs and she invited us to come over. It was also our first time to travel together in Europe, since I just arrived a couple of months in the Netherlands.

OUR FIVE DAYS TRIP TO MUNICH

You could travel by car, by train (or night train) and by plane. The first option is not applicable to us, so we chose to travel by train.

We went to the nearest train ticket station for a reservation.  We chose to travel by ICE International. Our travel date was a week after the autumn vacation, because it was already off-peak season. And because of that, we had luck! We paid for the first class tickets the same price as the second class tickets. It was an offer we could not resist! 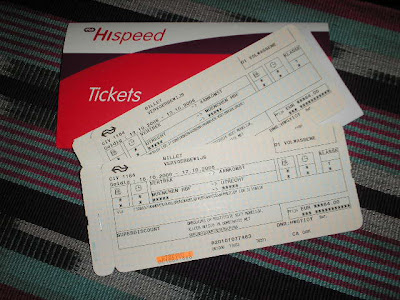 Although our travel time was long, I enjoyed the sight-seeing from the train. Problems? We didn't have any. First class is better that second class, of course! In the train we could freely stretch our legs or take a nap. But I could not sleep. I was excited and I just wanted to look outside and enjoyed the view. It was nice to see the mountains all covered with autumn's colors. 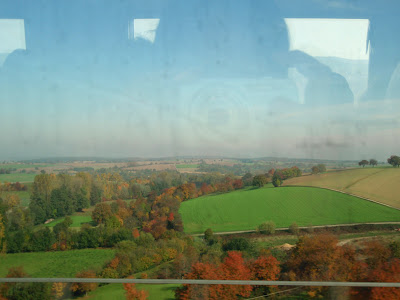 We arrived around 4 o'clock in the afternoon. Our friend worked part-time at Sea Life Munich, when we met her, she toured us free inside. We have enjoyed it, eventhough it was for a short time.

They say that the design of the Disney fairytale's Castles was based on Neuschwanstein Castle. We were all excited to see it.

From Andechs-Erling we traveled about two hours by car. Our friend has bought the tickets online. But you can also buy the tickets by the ticket booth before you start the climb to the castle. When we arrived, we were just on-time for the guided tour. There were so many tourists from all over the world. Everyone was ardent to see the majestic palace of Bavaria.

This majestic castle was built in 19th century ordered by King Ludwig II. It lies in foot hills of the Alps. The setting of the the operas of his friend Richard Wagner had given him inspiration to build this palace. 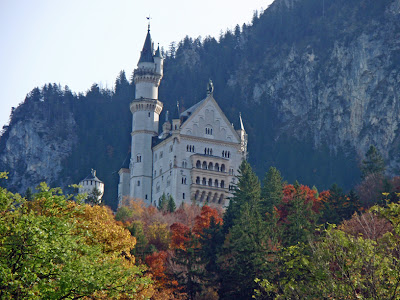 You can reach the castle either by foot, by bus or by  a horse-drawn carriage. We took a bus going uphill. From the bus dropping point, we walked about 600 meters going up to the main entrance. 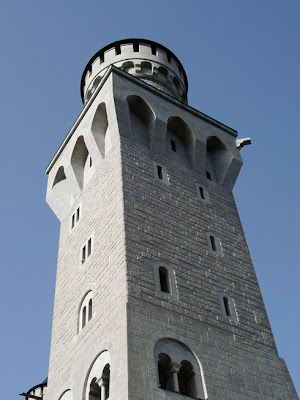 The place is ideal to dream about a once-upon-a-time stories with only happy endings. The castle is definitely one of a kind and worth-seeing, although it is not a real medieval castle but a sort playground of King Ludwig. The tour we had was also fun. King Ludwig has brought us to his piece of dreams. But photography is not allowed inside.

After the tour we walked going to Mary's Bridge. They have a view deck before you reach the Mary's Bridge and the view there is totally fascinating. The season's colors bring more beauty in


We continued to walk uphill until we reached the bridge. From the bridge you can make a landscape photo of the Neuschwanstein castle. It was a pity that the castle was under renovation when we visited it.

You could further walk uphill until you reach the peak of the hill. Just be sure that you have a good trekking shoes.

After staying a couple of minutes in the bridge it was time to go. We walked down the hill going to the bus dropping point. 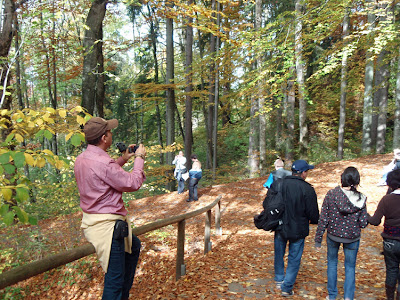 When we already descended, we went to the nearby restaurant to eat. We ordered a typical Bavarian white sausage. When I tasted it, I like more the typical German sausage with curry.

Our friend asked us if we wanted to go to Austria. It's just an hour ride from Neuschwanstein. We thought that it was a good idea. After all our friend is familiar with the place. It was already past 2 o'clock in the afternoon, we decided to go.

OUR DAY OUT AUSTRIA

Austria is only an hour drive from the village of Hohenschwangau.

Since I have lived for about 28 years in the tropics. It would be amazing to see the snow. That day they wanted to show it to me. Our destination ... - The Oetztal, Alps. 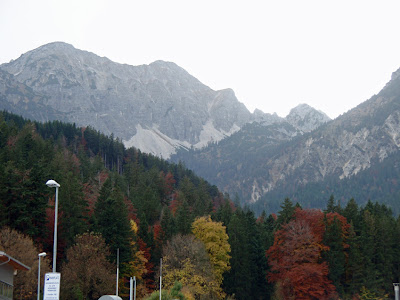 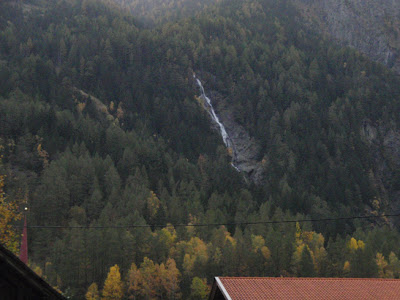 Our friend is a good lady driver. If not she would not dare to climb up the Oetztal glacier road, which they say that highest tunnel in Europe. It is about 3000 meters high. One mistake and we're all finished, I thought. But we reached the place safe and sound! Whew!

It was already 5:30 in the afternoon, we passed by the toll gate, but the guards had never stopped us. We reached the ski station and it is already closed. No one was present, only the three of us. We had only 30 minutes before it got dark, we had to hurry. 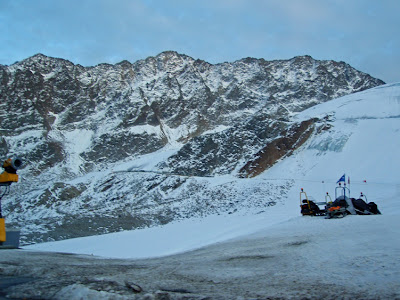 So after making few shots, throwing snow to each other, we hurried back to the auto. The goal was achieved, one dream came true. I have touched the snow.

It was a short trip, but I hope someday I could spend a Christmas holiday here.

Our friend brought us by the S-Bahn Station in Starnburg. We travelled about 30 minutes going to Munchen city proper.

From the S-Bahn we walked going to the city center. We saw quickly the St. Peter's Catherdral and the Munich City Hall. 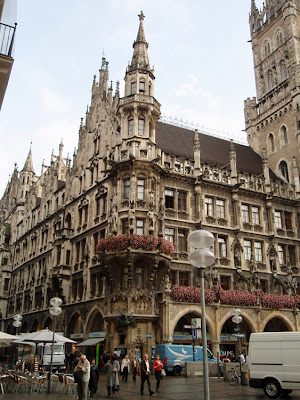 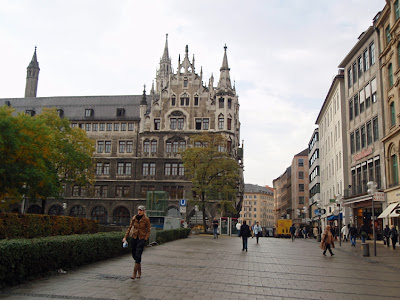 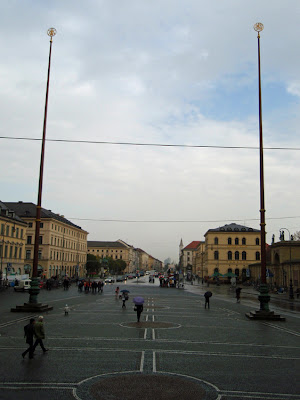 An important place that you should never miss if you are in Munich (because we never did) is the Hofbraeuhaus. This is really a nice place to have a pint right from the tap! With live jolly Bavarian music.


Before we went home, we went first to Nymphenburg Palace. I can't remember anymore how we got there specifically. All I can remember is that we took the S-Bahn, from the S-Bahn station, we rode in a bus and then we stopped at one bus station, then we walked to the palace.


The palace has a beautiful garden, though we had no time to explore the whole place. We sat on a bench , then someone had approached us, he was speaking in german, saying we had to leave. Because there would be a filmshoot on 5 o'clock. We had no choice.

It was already late and we were tired from a long day walking in the city. On our way home, we took the S-Bahn going to Herssching and our friend picked us up there with her auto.

We trekked early in the morning about 8 kilometers from our friend's house in Andechs going to Herssching Am Ammersee. We walked under a perfect sunny autumn weather. The trail was nice, it was full of colors. We always enjoy walking to this kind of trail especially when it is autumn or spring. 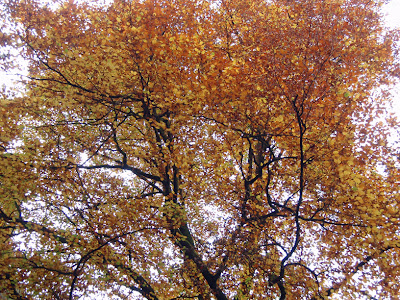 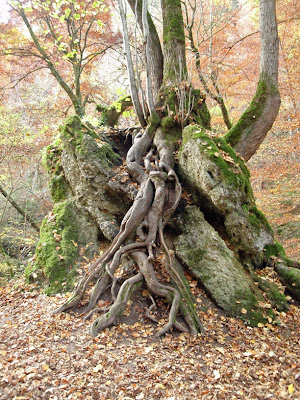 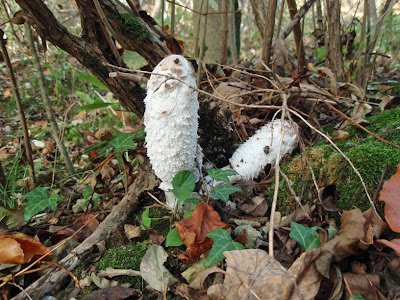 They say that the lifting of maypole is most popular here in the villages of  Bavarian Alps. They usually painted the pole with Bavarian colors (white and blue) and decorated with emblems representing the village local crafts and industry.

The Bayerische Seen-Schifffahrt offers four cruises to choose from. We chose the Southern Tour. I think that is the shortest.  This cruise takes an hour. We chose it because we did not have enough time, after the cruise we still had our last destination. 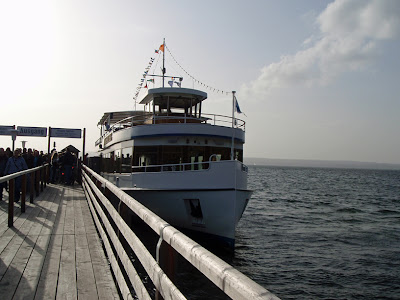 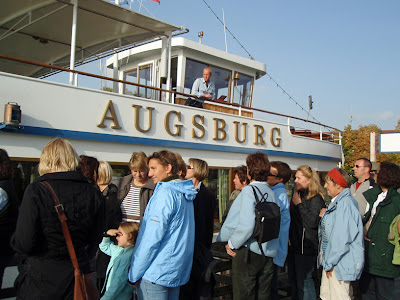 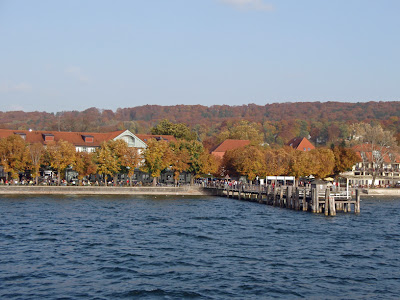 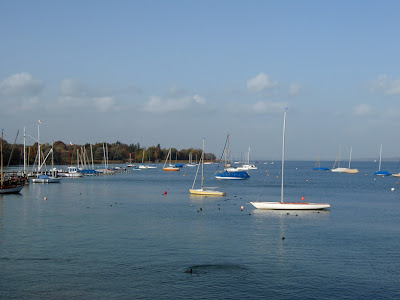 It was already 4 o'clock when we arrived at the port. But we were happy with the cruise. We had a great time. We had a non-stop three days activities. Our bodies were saying we had to rest. Because of the cruise, we had even rested for a while. The outlook from the viewdeck of the boat was great. There were also sea-gulls flying above after our ship.

From Herrsching Station we took the bus going to Andechs Monastery. When we arrived in Andechs we walked a little uphill, until we reached the monastery. It was already late in afternoon, the monastery is already closed for visitors. The only open were the Restaurant, the beer garden, the souvernir shop and the church. 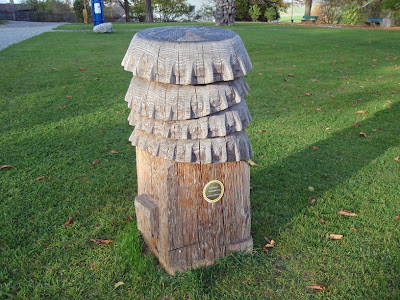 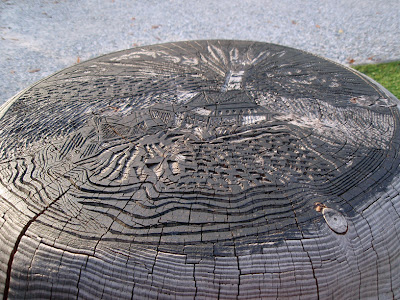 It was getting dark and since we were still waiting for our friend to come. We went first to the church to see it. The church was built around 1430, but it is still beautiful. It is small but the baroque design is  overwhelming. 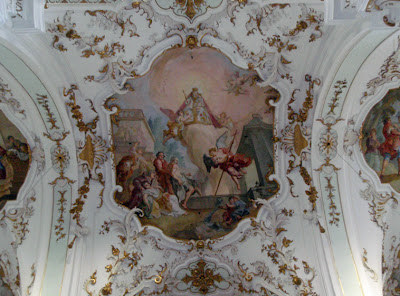 After the church visit, we went also to see the cafe. It was full of beer-lovers. I should say never skip this place once you are in Herrsching, because this place is one of the German's splendid! This place is not only popular because it is a sacred mountain, but also because of the cloister beers they brewed.

As farewell to our friend. We had our dinner in the Klostergasthof Restaurant. We have tried their pumpkin soup and a pork menu with potatoes, the taste of pork menu was somewhat like as lechon in the Philippines. We ordered also cloister beers. Lekkerrrrrr! We had a big dinner.

Our friend has brought us to one of the nearby station in Andechs. From the station we took the S-Bahn going to Munchen. We were on-time to catch the train going to Frankfurt (Main) Hbf. Then we transferred to another ICE train going to Utrecht. 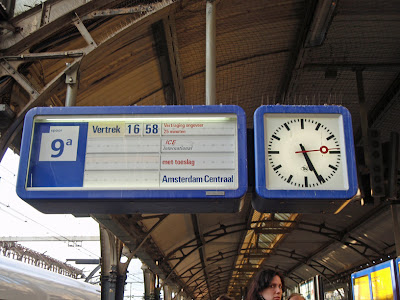 Four days was long, we missed our bed. There is no place like home.