It is always fun to be with friends and spend a day without thinking about work or any other else. Spotting bargain, visiting places, sharing a girl talk while sipping on a cup of tea? I called this - "Girl Power Day"!

I was again in Amsterdam with the same person we were with two weeks ago in Artis Zoo. We have been talking about going out together a long time ago and because she had three weeks vacation from work. We grasped the opportunity to meet again. I want to see more places in Amsterdam, so she toured me more in the city.

1)  She brought me at the Waterlooppleinmarkt. 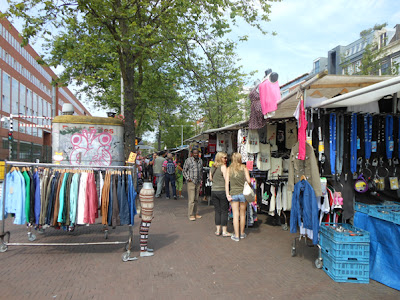 The Waterloopplein is the largest  flea market in Amstedam. From African local goods, Asian accessories, brand new/second hand clothes and shoes, antiques, books, bicycles and accessories, foods and other knicks-knacks, you can find it here for a measly sum.

My friend and I rummaged through the used clothes (ukay-ukay) on the ground. My friend was lucky to find a very nice second hand Indi skirt and a tank, both for 6 euro. As for me, I was not so lucky, so I just bought two black Cookie Monster t-shirts with humorous texts from one of the market stalls. One for me and one for Honnepontjie.

2) We ate at a cheap Surinamese-Chinese eatery at the Waterloopplein Subway Station.

Surinamese eatery is very similar to Pinoy carinderia. They are selling rice with different dishes and mirienda. We ordered two Broodje Tempeh for lunch for only 5 euro. Tempeh is a traditional soy product out Indonesia.

3) We walked from Waterloopplein to Rembrandt Square 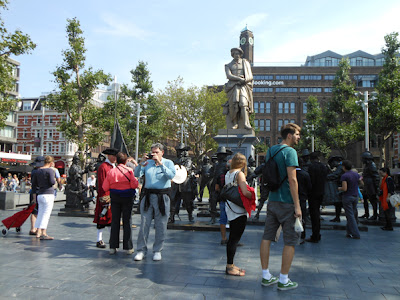 After our enjoyable lunch, we walked to the Rembrandtplein. The square is named after the Dutch famous painter - Rembrandt van Rijn.  It is a small square surrounded by hotels, clubs, cafes and restaurants. It was originally a Botermarkt or Dairy Market in the mid-16th century. Aside from the Rembrandtplein's nightlife. The 3D sculptures of the Night Watch is the newest attration in the square. 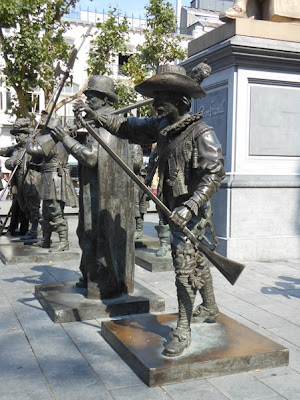 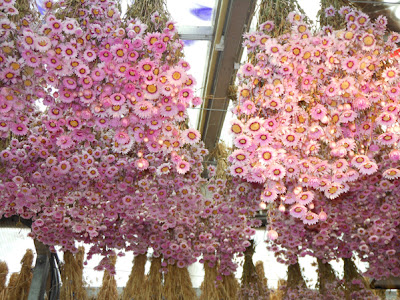 The Flower Market is located at Singel Canal between the Koningsplein and the Muntplein. I never thought that the flower stalls stand on the house boats. You can buy all kinds of flowers and bulbs here and they are all ready for export. Opposite the flower stalls are different souvenir shops, cheese store and a Christmas shop, which is open all year round. 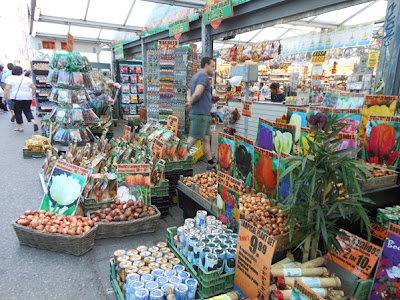 4) We visited the Begijnhof (Beguine's Court) 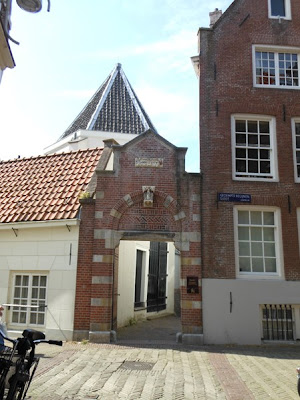 The Beguine's Court is an inner court in the heart of Amsterdam. The beguines are group of religious women similar to nuns. But they enjoyed more freedom than the nuns in the convent. Just like the nuns they also took a vow of chastity in the Beguine's Court, but one of their privileges was, that they could leave the court at any time if they wished to marry. The last Dutch beguine died in 1971. 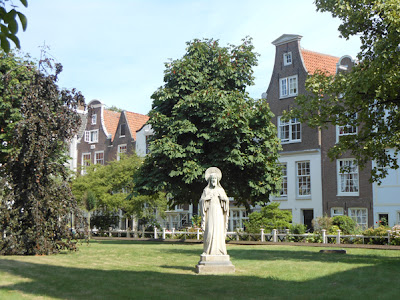 Although the Begijnhof is located nearby a busy shopping street - Kalverstraat. The place is not very popular to the tourists. It is not as busy as the other places in city. 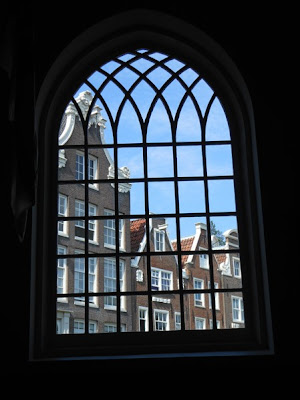 5) We have drunk tea at Museumcafe Mokum 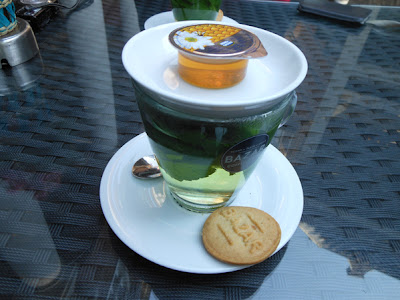 We walked in the Gedempte Begijnensloot street to Amsterdam Museum. The building, where the Amsterdam Museum is located, was in the Middle Ages a monastery. Later during the late 15th century it became a city orphanage. The museum courtyard was very quiet. We saw people quietly resting and reading books. We did not visit the entire museum, but we walked on the City Guard Gallery to see a public exhibition entitled "Mijn Stad (My Town)". The other side of the inner courtyard is the museum cafe. Its terrace was a former cow shed of the abbey. The museum cafe and its terrace is very wonderful and absolutely recommendable.


6) We have bought ice cream at Banketbakkerij Van der Linde 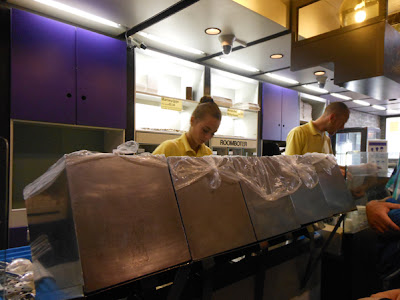 From Amsterdam Museum, we walked to the famous Dam Square, then through the busy shopping street - Nieuwendijk. My friend showed me the best soft ice cream parlor in the city - the Banketbakkerij Van der Linde. A family business founded in 1937 and still owned by the family until now. She told me that her mother used to buy soft ice cream here since her childhood. They still often come here to taste the ice cream. She added also that everyone in Amsterdam knows this address. 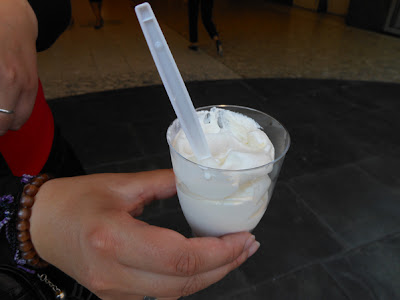 Their soft ice cream is indeed one of the best. It is very creamy and not so sweet. I would like to taste next time their own original slagroom mergpijpjes. We ate the ice cream at the Beursplein.


7)  Window shopping at the Bijenkorf


The Bijenkorf is the biggest department store in Amsterdam. It is located in a monumental building nearby the Dam Square. You can buy a wide range of luxury products in this department store. We wandered at the children section. The toys were wonderful. She told me that when the department store was not yet renovated, we could see the view of the Amsterdam Central Station from the building.


8) We walked along De Wallen, the most famous street (for men) in Amsterdam 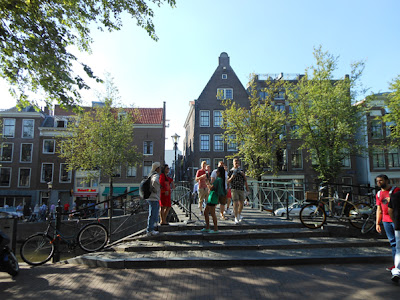 Sex shop, sex shows and theater, coffee clubs selling soft drugs and many more. Most of the young male tourists visit Amsterdam just to see this. De Wallen is the best known red-light district in Amsterdam and the most crowded street at night. I saw the area for the first time after our visit to the Artis Zoo. It was evening. De Wallen is totally a different world and there is a big difference between walking on the area during daytime and nighttime. 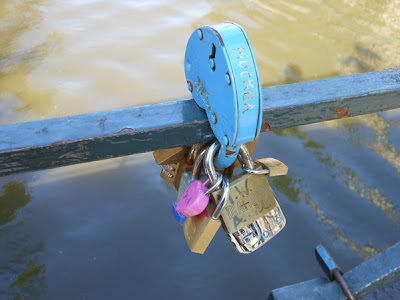 9) We chilled out at the Temple Bar Cafe, Nieuwmarkt


Our friend told me that this area is also called Chinatown Amsterdam. The Waag building is the best-known landmark in the area and it is facing a square. There is a daily market here and there are many cafes, restaurants, stores and Chinese supermarkets that surround the square. We were supposed to see the nearby temple, but we found ourselves sitting in one of the cafe terrace drinking choco mocca and white beers. An amateur jazz musician was also performing on a boat in the singel. We had fun talking and we have not noticed that it was getting late. We forgot the temple anymore.


This was one the best days ever! I was very happy to spend a day with her. I really hope we can have another day-out together and our backpacking trip plan soon will happen.

I love the flower market already. Thanks for following my blog, I am following yours too. =)

Now this is a refreshing feature of Amsterdam. When people talk about it, it's always about the red district, the sex trade, and smoking pot.

There's still a more humane and religious side of the city. And I really find this country and the Dutch interesting.

I'm almost sure that they have a very different way of thinking than the Italians. I hope I can visit the city next year. And of course, I would be a hypocrite if I say that I won't visit the red district. Just curious. Hehehe!

Dearest Kulengkleng,
We don't have much frea market here in Japan. I enjoyed the pictures of Amsterdam so much; Thank you very much for the tour♡♡♡

I'd love to see those places too in person but I'm glad you shared the many photos. The architecture of the buildings are totally different from what I often see here. Ang ganda dyan! Your friend did a great job in touring you around. Thank you for sharing! :)