The Grand Duchy of Luxembourg 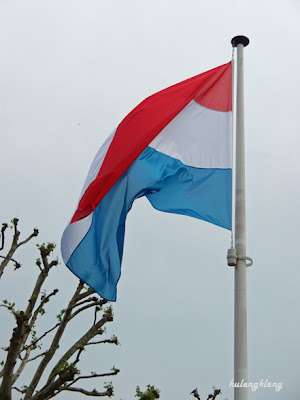 The story about kings and queens, prince and princess, the graf and grafin, and the dukes and the duchess. Those titles I only read in the books and see in the movies, when I was still in the Philippines are very fascinating. Knowing all these are not only present in all Walt Disney stories, it is nice to know why there are so many titles in a kingdom. I have many questions and one of my question is, what is grand duchy?

As what I've read, grand dutchy is a territory ruled by the duke or the duchess, affiliated by the king in the past. They received a higher rank in the whole territory, but they did not have enough sovereignty just like the king.

Nowadays, there is only one grand duchy that exists. The Grand Duchy of Luxembourg. But just like the Netherlands, Luxembourg is also a constitutional monarchy, the duke is head of the state, they are still part of the government, but they don't have political power.


OUR GREAT EXPERIENCE IN LUXEMBOURG

Luxembourg is one of the smallest countries in Europe. It is also one of the Schengen Countries, so going there from the Netherlands is accessible. The capital of Luxembourg, is also called Luxembourg. The citizens speak three official languages: German, French and Luxembourgish.

Our trip was a four-day train arrangement to Luxembourg.

We stayed at Mercure Grand Hotel  Alfa Luxembourg. A four star hotel, walking distance from Luxembourg Station. A very ideal hotel to stay in. We had a nice stay and we were really satisfied with the service. Their buffet breakfast is delish.

We travelled early in the morning. We had five stopovers and because of that we had approximately 5.5 hours travel time from Utrecht to Luxembourg.

Here is the oversight of our travel:

We arrived at 12:30 o'clock in the afternoon. After checking in, we rested first. Then afterwards we went outside. We walked towards the city proper. I was totally surprised with what I have seen. There are many bridges, fortress walls, old architectures and castles. 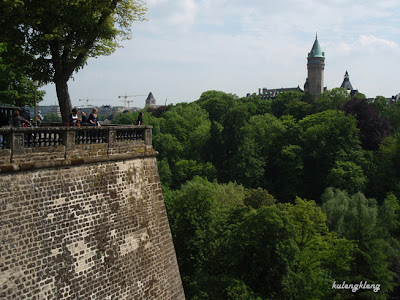 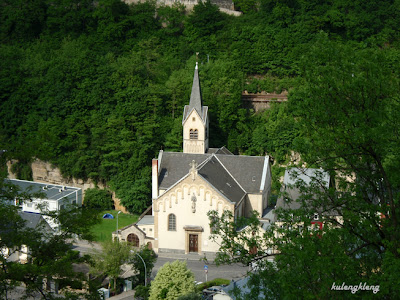 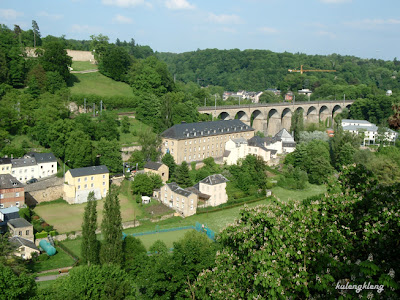 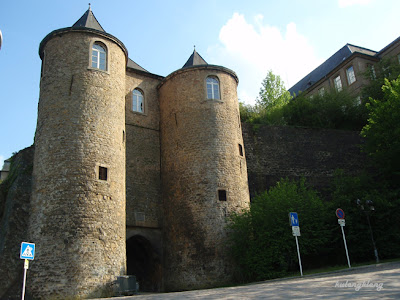 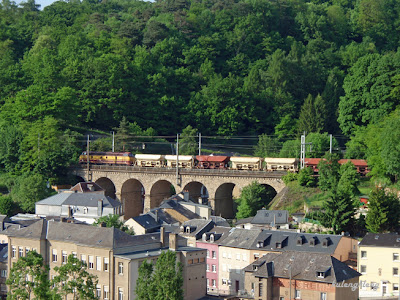 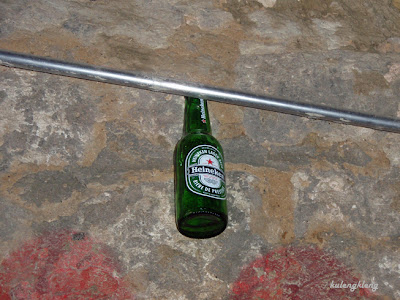 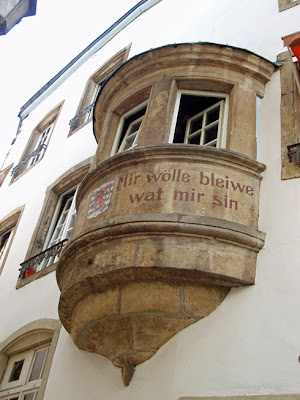 We were impressed with all the things we saw on our first day.

The city shimmers also at night. It was still early in the evening, but the street was strikingly silent, almost no one more walked on the street. 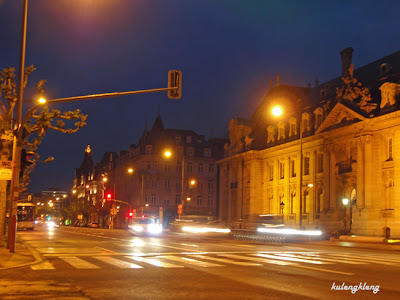 We had a long day, but we were happy for choosing this destination!

We got extra  panorama city map after our inquiries. In the city map all attractions are numbered, it is up to you where do you like to start.

We decided to take first the right part of the Petrusse Valley and then later in the afternoon the other part.

Walking down the Petrusse Valley is quite steep.

The viaducts are astonishing. It is high. Luxembourg has its own character. The fortress walls, the bridges, the old architectures are all worth-seeing. 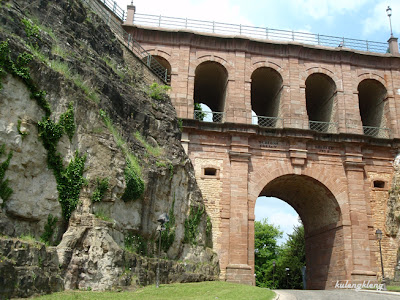 We have followed the numbering on the map. From Petrusse Valley, to Grund, going to Plaffenthal and then going back to the center.

We were satisfied with our second day. Because we saw everything. We took first a break before we went to Kazematten / Casemates. We were the last visitors they have allowed to descend underground. 15 minutes before closing.

They have used the 23 kilometers casemates during the war as one of their defense mechanism against the Spanish and during the second world war these served as shelter for 35,000 people. But because Luxembourg declared that they were neutral after the war, they have destroyed some parts of the casemates. Only 17 kilometers portion of the casemates in Luxembourg remain and since 1994 these are declared as one of the world heritage protected by the UNESCO.

After our visit to the Petrusse Casemates, we bought some souvenirs. I would suggest if ever you would buy souvenirs, it is better to buy it by the Tourist Information or by a Kiosk, you are sure that you get the right price.

In the Netherlands when you buy gifts, they would automatically ask you if it's a gift or not. If it's a gift they would wrap it, without charge. Not in Luxembourg, I asked the storekeeper where I bought the souvenirs, if they do gift wrapping, but he gave me a chagrin face. I just smiled back.


We decided afterward to go back to our hotel and rest. After our dinner we walked towards the other side of the Petrusse Valley.

It was getting dark. Only few people were walking in the park. The rain was unpredictable. It stopped and then it started again to pour. We were also lost. Fortunately we saw a couple, we asked them if we were walking on a right track. And yes, we were! We only had to walk upward. We arrived again at Boulevard de la Petrusse, we walked to the bridge from where we had started.


On our way home we saw unexpectedly a supermarket. It's just very close to the hotel. We bought snacks and beers. We arrived in the hotel about 10 o'clock in the evening. We were happy with the outcome of our second day. Although we were tired, but we were absolutely satisfied!

It was roughly 11 o'clock in the morning when we leave the hotel. We bought our weekend ticket through the Tourist Information. We were so happy because it was cheap. We paid only 6 euro for two, but it was good for 5 persons.

Vianden is an hour ride by train from Luxembourg Central Station. From the Central Station we had to stopover at Ettelbruck, then took a bus going to Vianden.

We arrived in Vianden around 12 o'clock in the afternoon and there was no sign that it rained in the area, yet the skies were cloudy. From the station we became more enthusiast  because we immediately saw the castle on top of the hill. 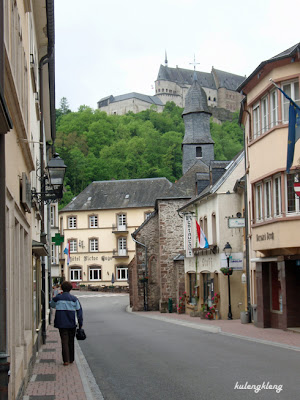 You could reach the castle either by foot or by car. The castle looks so far but not. We decided to walk, but because it was directly steep, we were almost out of breath going up. There was a bench before you turn right going to the castle. We rested first on the bench, while enjoying the glimpse of the castle from our seat.


This castle is very interesting. The history of the castle tells also about the relationship between the family of the Great Duke of Luxembourg and the Orange-Nassau family.

I was also amazed about the inventions below.


From the top you can see the river, the village, the Ardenne. It is very beautiful. 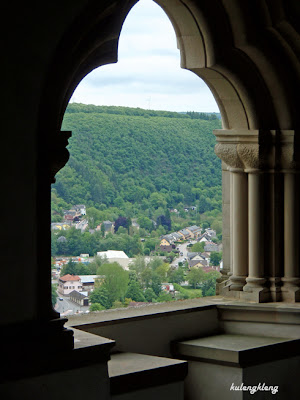 We still walked around the palace before we leave.
The picture below is the main entrance in the castle.

After our visit we took a break in one of the nearby restaurant. Because Vianden is very touristic, expecting a reasonable price was not possible. 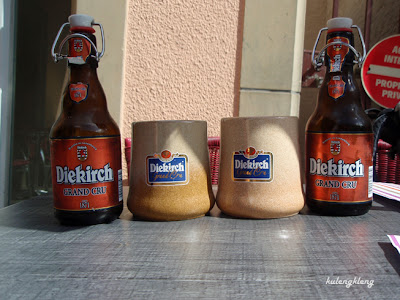 Although we were satisfied with our visit to the castle and the place. We were also disappointed with:

what we have eaten in the restaurant.
The tosti was too simple and not warm. The food was too expensive for the quality. Only the Grand Cru is good.

Second, some people are not so hospitable.
It was past 5 o'clock in the afternoon. A butcher was still open,  we went inside (because we saw on a board that they are open till 6 p.m.). We would like to buy something, but we were not yet one minute inside when the worker or maybe the owner asked us in French if we would buy something or not, because they were closing. It was said unfriendly. We just smiled, said goodbye and walked through the door.

Another one, we went to the the gift shop to buy souvenirs. I asked first if they were still open because of what had happened by the butcher. They said yes! But their gesture was offensive while we were looking around. We were not welcome. After buying postcards we went quickly outside. We were really disappointed.

They say you must treat the customers as queen and king, apparently not in  Vianden.

We had not experienced these things in Luxembourg. For us the place Vianden scored high because it is beautiful, but I gave them demerits for their hospitality.

The bus was late. When we arrived at Ettelbruck, we thought we could still walk around, but we changed our minds, it was already late to do it. We also did not want to miss the train. We decided to go back quickly to Luxembourg.

After checking out, we still bought some souvenirs at the station. We had the same stopovers just like the first day.

Luxembourg is sure one of the nicest place to visit. This land is included on our Revisit List. We were happy that we have chosen this destination. It's worth it.

Places I would like to see in Luxembourg next time: Echternach, Diekirch